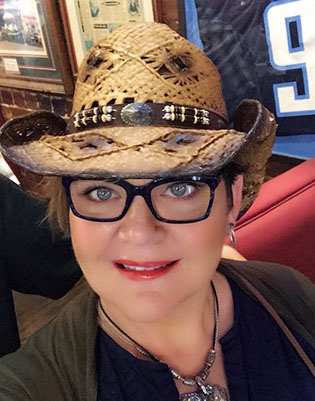 At the beginning of 2003, I was a single mom of two daughters (ages 9 and 11). I had been a single mom for four years. Little did I know the amount of change I would be experiencing over the next 12 months. The year began with so much anticipation and excitement for so many life altering experiences. In January, my oldest daughter and I spent three weeks in South India on a mission trip working at an orphanage and baby girl rescue. I was in wedding planning mode and got married in April. A few weeks after my wedding, a school shooting occurred at a school district where I taught. By the time summer arrived, I started packing up our things to move into the home we purchased in East York. Yes, I was experiencing many life-changing events.

As the school year was beginning, I had noticed what I thought was a lump in my left breast. I wasn't really sure what it was. I knew my yearly physical was coming up in a few weeks, so I figured I would ask my doctor at that time. Well, the day of my physical arrived. I had actually forgotten that I was going to mention that "thing" I thought was "maybe" a lump. I mean really, I was 36 years old. I was pretty sure it was nothing. Maybe it was one of those fluid-filled lumps I heard a few people talk about that required a needle to take the fluid out. When the nurse practitioner was completing the breast exam portion of my physical, she noticed the "lump" on my breast. She asked if I had felt it. At that moment, I realized it wasn't my imagination. She gave me orders to get a diagnostic mammogram with an ultrasound. She didn't seem very alarmed, but did tell me to be sure to get the mammogram done soon.

It took me another two and a half weeks until I finally made the appointment. I went in for my mammogram (the second one in my life). I had one other mammogram for a screening for my right breast for a non-cancer concern that ended up being negative. People who know me know that when I am nervous I sometimes can chatter up a storm to compensate for being nervous. So, there

I was getting the infamous "squeezing of the breasts" experience. Then the technician asked me to move to the next room where I would get the ultrasound.

By this point, I was laying on the table chatting away, "This is probably one of those "fluid-filled" benign things that have to be aspirated. Oh, I hate needles." The technician continued to take images with the ultrasound machine, but she was not really participating in my conversation. She was focusing. I asked her, "So is it filled with fluid?" She said nothing…and continued to take measurements and images. I asked again, "So is it filled with fluid?" This time a long pause. She then said, "No, it is solid." I didn't understand what she meant. Maybe everything was normal. I just have lumpy breasts.

After what seemed to be an eternity, but was actually more like 45 seconds, I finally said, "What does that mean? It's solid, what does that mean?"  The technician said, "It means you need to call your surgeon." I told her I didn't have a surgeon. She said, "Why don't you call your doctor?" So she dialed the number for me and I asked for my doctor. My doctor, who by the way happened to be on the India mission trip with me in January, gave me a few names of surgeons to call. This was another life-changing moment.

I decided to call one of the breast surgeons. I shared with the receptionist the information from the mammogram technician and my doctor. I remember sharing information that sounded like a foreign language. The surgeon suggested I come in the next morning at 7:30. She was going to meet me before she would go into surgery for the day. She looked at the images, did another ultrasound, and then took some core biopsies. She explained that the images that were taken the day before as well as what she looked at that morning, indicated that the tumor could be cancerous. We would know by late Monday afternoon.

I went camping that weekend and tried not to think about the word "cancer." I did my normal Monday routine and taught math classes all day. I came home from work and was sitting in my new home of two months and listening to music. At 4:54pm on October 13, 2003, the phone rang.

"Hello, Lisa. I wanted to let you know your biopsy results have come in." "Do I have cancer?" "Yes, you have cancer." Another life-changing moment.

The next day my surgeon sat with me and explained my diagnosis. I had stage 2 triple negative invasive ductal carcinoma. I remember saying immediately, "I want a double mastectomy. Just take my breasts off." She explained my options. She said the prognosis with a lumpectomy (with chemotherapy and radiation treatments) vs. prognosis with a mastectomy were equal. She explained that I needed to make an informed decision. She wanted me to talk to the medical oncologist, the radiology oncologist, and the plastic surgeon. She had scheduled these appointments over the next 3 days. She would then meet with me in a week to discuss my decision and schedule surgery in about two weeks.

I am grateful to have had such a wise group of doctors. I ultimately decided to have a lumpectomy, chemotherapy and radiation. I also decided to continue teaching full time even though my medical oncologist suggested I take medical leave. I remember my oncologist saying to me, "Lisa it is time to put yourself first." I didn't really understand what she was saying to me. I would learn more over the next months, and quite frankly years.

Surgery was actually not too difficult. I woke up to discover I had no lymph nodes involved, but my tumor was larger than they realized. A few days later, the lab reports indicated clean margins. I was given a few weeks to heal before starting my chemo treatments.

My first treatment was the Friday after Thanksgiving. Because I was young and healthy, my oncology team determined I was a candidate for dose dense chemotherapy. I would receive eight treatments of chemotherapy, one visit every other week. The first four treatments were Adriamycin and Cytoxan combined. The second four treatments were Taxol. During those months, I experienced many life-changing events: loss of hair, neuropathy in my right hand and leg, joint pain, and glimpses of a failing marriage.

Halfway through my treatments, I had to have a PET scan. I had hoped to be part of a clinical study, but was not eligible because my blood work indicated very high calcium. This can be an indicator of metastatic breast cancer.

After the PET scan, the cause for the high calcium was determined to be connected to overactive parathyroid gland activity (four tiny little glands beside the thyroid). This condition would be addressed after I completed my cancer treatments.

By the end of May it was time to start my radiation treatments. I like to affectionately refer to them as a daily tanning session for my boobs. Oh, and my FIRST tattoos. Ok, they look more like ink spots, but they are tattoos. I discovered radiation treatments really did exhaust me. In June of 2004, my treatments were complete. In July 2004, I had to have surgery to remove two of my parathyroid and my thyroid (it was covered with five solid nodules which ended up being benign). More life-changing events; surgery, recovery, marriage failing.

What I didn't realize is that during the time I was receiving cancer treatments, I never felt like I was powerless or helpless. In fact, I felt I was "doing something" to actively fight this ugly thing called cancer. For me, the months after cancer treatments proved to be the months I felt powerless and helpless. I thought I would feel empowered. I beat it. I beat cancer. I found myself jealous of the women who had hormone positive type breast cancers. They could continue to take drugs to "fight the cancer." The diagnostic mammograms and MRIs that occurred every three months for a year, then every six months for a few years, then every year...they were terrifying. Then after receiving the results…RELIEF. People would remark to people who knew me, "Wow, Lisa is so strong. She worked full time through her cancer treatments."
I was a single mom and a tough cookie, so I just pulled myself up by the bootstraps and kept on marching.

By 2006, my marriage had crumbled. Honestly, it probably had been broken during the cancer treatments, but I didn't want to acknowledge it. During the cancer treatments, I experienced physical and emotional abuse. I decided to seek counseling. I realized if I could fight cancer and win, I would survive a broken marriage. I finally understood part of what my oncologist was telling me. I needed to put myself first. I have learned to take care of myself both inside and outside. I have to admit, the first time I was given the "screening" mammogram instead of the "diagnostic" mammogram I was terrified and cried. However,
I still get a bit anxious, so if you see me in the waiting room and I am chattering…you will know why.

Because of my diagnosis and a family history of many other cancers, I decided to have genetic testing a few years ago. I was relieved that I did not have the BRCA1 or BRCA2 gene mutations. I was especially grateful for my daughters.

Truly this was a journey I would have never chosen. However, I am so incredibly grateful for my journey 15 years ago because it has allowed me to realize that I am so much stronger than I ever imagined. I have been given an incredible gift of life. I have discovered there is a bond between those of us who are surviving. I continue to practice "putting my health first" by having my yearly physicals, doing monthly breast exams, eating healthy and exercising (ok the last two are an ongoing goal). The greatest gift was finding a man who I married, an unexpected yet sweet surprise. And now Mark and I get to journey through life together. Each year I celebrate October 13th, my diagnosis day, as my "Savoring Life" Day. How will you savor life today?